5 Takeaways from the BNEF Future of Energy EMEA Summit

Last week, 18-19 September, at The Bloomberg New Energy Finance Future of Energy Summit in London, of which Schneider Electric was a 2017 sponsor, traditional players and advanced-energy leaders came together to discuss critical energy issues.

European markets are seeing an energy transition. In April, for the first time since the Industrial Revolution, the UK went an entire 24 hours without using any coal power, relying on natural gas, nuclear, and renewables only. Investments in renewable energy and cleantech overall continue to hit new records, and countries around the world are innovating on these clean solutions faster than ever before.

On a CEO panel, with representatives from EON, ENEL, and Innogy, it was unanimously decided that in the long-run, renewables will perform just fine without the support of federal subsidies, though the short-term outlook may see moderate struggles. In April, Germany grid regulators approved a subsidy-free offshore wind project, and just this month a UK auction revealed that offshore wind was cheaper than new natural gas resources.

The rapid uptake of corporate, industrial, and institutional (C&I) renewable energy targets, with over 110 global companies joining the RE100 and more than 300 taking action via the Science-Based Targets Initiative, means that more companies than ever are in the market to procure renewable power. A PPA is the fastest way for these buyers to both meet these goals and make a tangible contribution to the renewable energy transition underway.

Technologies on the horizon for corporate buyers, such as microgrids and energy storage, are an ascending trend primarily in the name of reliability and resilience of supply. Today’s energy experts have their eyes on market-led flexibility driven by innovation rather than mandates or compliance.

From the lively speakers to the trends and technologies discussed at the Bloomberg New Energy Finance Future of Energy Summit, it was exciting to feel a tangible shift in market momentum. The transition toward decarbonization, through cleantech and renewable energy, is now unstoppable. The grid of the future is sure to be cleaner, more efficient, and more economical than ever before.

To learn about strategies that help your company embrace the future of energy, get in touch with our team today. 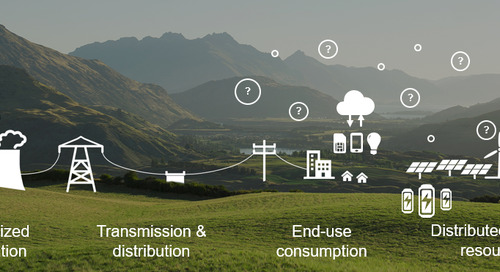 The energy landscape is on the brink of disruption. Because of this, forward-looking companies are already ...