Part two of this three-part series (first post here) examines two prominent examples where innovation radically reshaped the market and focuses on how an organization’s response can help dictate its role in the new energy landscape.

Focusing on specific trends instead of the bigger picture

This series started with an examination of the U.S. shale boom, and how it reworked decades of conventional market wisdom and rocked OPEC, the world’s most well-known cartel. But the oil industry’s “new normal” has had ramifications well beyond crude. Cheap associated natural gas from the shale boom has suddenly made gas-fired generation considerably cheaper than coal in many electric power markets. In this sense, a technological shift most often associated with the oil industry also upended normal expectations for baseload power economics. The impact then rippled to other grid-connected resources, such as wind and solar farms.

Natural gas has now pulled even with — and at times even overtaken — coal as the main source of U.S. power generation. The coal industry is well-versed in attacking (what they argued were) burdensome regulations and unfair subsidies for renewable generation. Meanwhile, technological shifts in the form of highly-efficient fracking made natural gas the more pressing danger for coal producers.

Those producers that focused only on the growing threat from regulation and renewables failed to adapt to a changing gas market, a far more significant obstacle for coal’s bottom line.

Looking at the chart below, it’s clear OPEC didn’t just raise their electric-vehicle (EV) forecast last year — they multiplied it exponentially. Similarly, Royal Dutch Shell and similar companies have warned that EVs could mean oil demand tops out as early as 2025. These are bold claims from an industry that, until recently, regularly projected oil demand to grow indefinitely. 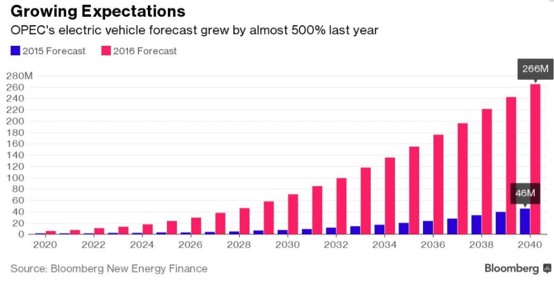 On the leading edge of this transition are some clear winners. Tesla Motors is one prominent example. The all-EV automaker is working hard to transition from high-priced luxury cars into the world of affordable family vehicles. Already, expectations of future revenue have propelled Tesla to a valuation $10 billion higher than Ford’s. In response, Ford has shaken up its leadership and spending structure to focus on the industry’s electric future. Other traditional automakers have taken even more aggressive steps: Volvo recently announced plans to produce electric vehicles exclusively beginning in 2019.

However, in an auto industry where change is constant, leading companies recognize they cannot watch and wait for the market to evolve.  At the same time, most also understand that this doesn’t require simply abandoning their core business, but rather allowing early action and diversification to gradually redefine what their “core business” actually is.

Similarly, big oil is spending larger portions of its research and development budgets into renewable energy and cleantech. Shell, for instance, stated those categories could soon account for more than half of its energy investments. As a result, Shell could continue to power global transportation long after internal-combustion vehicles go the way of the 8-track players they used to feature.

In each case, there are lessons that apply well beyond the energy sector. One of the prevailing morals is that a holistic approach to market and technology risk is critical. Balance the need to stay ahead of tomorrow without sacrificing competitiveness today.

Part three will take a closer look at balancing the proactive with the pragmatic. E.g., what might a battery storage breakthrough mean for electric power markets? And what should corporations do today to position themselves for an uncertain-but-opportunity-filled future?

Stay tuned. And in the meantime, check out the video on “Energy Innovation – Short & Long-term Effects on Procurement.” In late 2017, Cummins Inc., a global power leader, announced the next step in its commitment to advancing r... ALERT—Schneider Electric has announced the release of a first-of-its-kind, comprehensive, offsite renewable...