What Hydrogen, Arnold, and Denmark have in common.

January temperatures across Europe ranged from a comfortable 22 degrees centigrade in Palermo, Italy to a distinctly chilly -15 degrees in Kemi, Finland with a coolish 8-degree average across the region. Consequently, though thoughts readily turn to how we effectively and affordably heat our homes and workplaces, the sustainability and environmental impacts of this are typically not front of mind.

Statistics from the EU suggest 84% of heating (and cooling) is still generated from fossil fuels. Although decarbonizing heat production may not garner as much interest as other sectors, it’s an important area of carbon reduction. Undoubtedly, images of heat pumps and district heating infrastructure are not as photogenic as wind turbines, solar arrays or the latest model Tesla, but if the CO2 reduction targets by 2050 are to be achieved in the UK, heat-related emissions must reduce significantly.

The Role of Natural Gas
Across Europe, the majority of heat for homes and businesses is underpinned by the combustion of fossil fuels, notably natural gas, or its variants, and to a lesser extent oil and coal. Gas usage reflects its convenience, reliability and safety for domestic and commercial heating purposes. Of the c. 600 billion cubic meters (bcm) of gas used across Europe, som

This dependency on Russia – and resentment of the leverage this affords them over many central European states – is, no doubt, why President Trump’s promise to export more U.S. shale gas to Europe in July ’17 was warmly welcomed in many quarters. The significance of this gains further momentum given recent and evolving sanctions applied against Russia, and in particular their gas and oil assets, by both the U.S. and EU.

Lessons Learned & District Heating
As is often the case, there are lessons we can learn from history in how to address both emission reductions and security of supply. During the oil crisis of 1973, it became apparent in Denmark that its reliance on imported oil was highly problematic as both homes and businesses went without heat during the winter. Consequently, Denmark reduced dependency on oil to improve its security of supply. An emphasis on ‘district heating’ was central to these plans.

In essence, district heating schemes deliver a system that generates heat and hot water (and electricity in some cases) locally and then distributes via a network to surrounding homes and businesses. This has proved so successful in Denmark that nearly two-thirds of homes get their heat from such schemes. District heating is encouraged across Europe as it forms a central part of the EU’s Heating and Cooling Strategy.

Innovation of Heat
The ability to find solutions to decarbonize the current “heating setups” across homes and businesses is no small task and will take many shapes. One development that may ease the transition to lower carbon heating is hydrogen. Hydrogen, and its part in sustainability initiatives, is most closely associated with the ‘Governator’ himself, Arnold Schwarzenegger, and his 2004 plans to develop a “hydrogen highway” in California. Aptly, hydrogen is making a resurgence (yes, insert your own “I’ll be back” line here), and some innovative work is being led by the HyDeploy project. This group is trialing the potential to blend hydrogen with natural gas at the University of Keele in the UK, which would significantly reduce emissions since hydrogen when combusted makes water. The hope is that this will allow the use of the existing network infrastructure and appliances (no need for new boilers, cookers etc.) without any modifications. If viable, hydrogen would be a significant step forward in decarbonizing heat while minimizing disruption.

To read more on this subject and 5 other trends for 2018, download our 2018 Global Energy & Sustainability Outlook

Our Recommendations
Decarbonizing how we heat our homes and businesses is critical in achieving European carbon reduction targets. As with renewable power developments, we expect technology to be a driving force behind the decarbonization of heat, and 2018 should see an increase in these schemes. Schneider Electric’s Planet & Society Barometer is a sustainability scorecard the company uses to measure i... 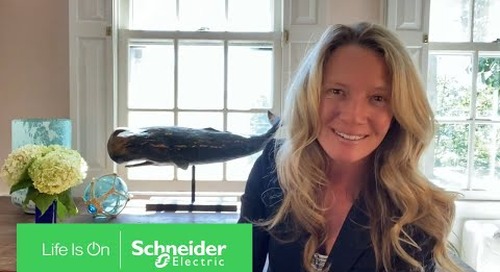